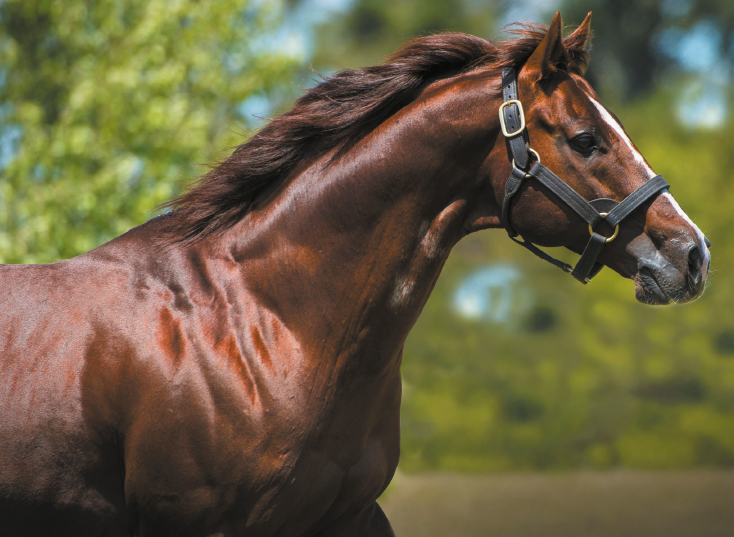 While Written Tycoon’s return to Victoria has inevitably grabbed the headlines, the new kids on the block could have an equally significant impact on the mid to long-term future of Victoria’s breeding landscape.

After a year away from Victoria, Written Tycoon has come home and will stand at Yulong Stud in Nagambie for a service fee of $165,000 (including GST) this year, which represents a quantum leap on the $8,250 he commanded in his first season at Eliza Park Stud back in 2007.

Written Tycoon’s record speaks for itself, and in the 2020-21 season his achievements reached even greater heights as his progeny amassed 17 Stakes wins to date* – the joint highest of any stallion alongside I Am Invincible. To add to this, he is currently on top of the General Sires table and looks to finish at the top of the list.

“Victoria continues to go from strength to strength and we truly have seen that ahead of the coming season. With Written Tycoon back home and the announcements we have seen from Victorian stallion farms – we have an incredible line up for the season ahead.” said James O’Brien, President of Thoroughbred Breeders Victoria (TBV).

“I don’t think Victoria has seen a stronger stallion roster for many, many years, if ever,” said James Price, who recently returned to Inglis to take over the position of Victorian Bloodstock Manager vacated by the retiring Simon Vivian.

“A number of Victorian Studs have made some significant investments in recent years, and it’s now really starting to pay off. Victoria is now in a very, very healthy position, and the future looks really bright.”

Those sentiments are echoed by Sam Fairgray, who in his role as Yulong’s Chief Operating Officer was instrumental in the agreement to bring Written Tycoon back to his old stomping ground of Victoria.

Since establishing Yulong’s impressive farm in Nagambie, founder Yuesheng Zhang has made a strong impression on Victoria’s breeding scene but Written Tycoon’s homecoming – combined with the addition of high-profile newcomers such as Group 1 winners Tagaloa and Yulong Prince – is set to leave a lasting legacy.

“It’s fantastic to bring Written Tycoon back home, it’s an absolute privilege to have him return to Victoria and stand with us at Yulong,” said Fairgray.

“We’ve been shareholders in Written Tycoon for the last few years, so we jumped at the opportunity when it became clear that he might be available, and fortunately we were successful.

“He’s still in fantastic condition, he’s bright and healthy so he could breed on for three or four more years without a problem.

“Last season he got 168 mares in foal, so he’s obviously still super fertile. We’ll manage him carefully, he’ll be supported with some fantastic mares this season – including Viddora and Unforgotten – but we’ll restrict the numbers to around 150 or so again.

If the son of Iglesia still sets the standard, it’s not unreasonable to assume that some of the first season sires flying the flag for Victoria’s burgeoning breeding industry will soon be making their mark on the racetrack.

Whilst many were disappointed that injury brought a premature end to Russian Camelot’s career on the track, racing’s loss was breeding’s gain as the two-time Group 1 winner will stand for an initial fee of $22,000 at Widden Stud Victoria.

The Danny O’Brien-trained colt, whose sire Camelot won the English Derby in 2012, was an incredibly versatile performer, winning races at distances ranging from 1400m to 2500m. He became the first, and so far only northern hemisphere-bred three-year-old to win an Australian Derby when he charged home to land the Group 1 SouthAustralian Derby (2500m); and whilst any comparisons with So You Think may be a touch premature at this stage, the fact that O’Brien rates him the best horse he ever trained speaks volumes of his talent.

Russian Camelot and Fierce Impact clashed twice on the track, and they will now go head-to-head in the breeding barn after Levena Park snapped up trainer Matthew Smith’s elite miler for their 2021-22 stallion roster.

Although Russian Camelot got the better of him in the 2020 Ladbrokes Cox Plate (2040m) when he finished a gallant third, Fierce Impact came out on top the first time the pair met in the 2020 Makybe Diva Stakes (1600m).

That was one of three Group 1 victories on Fierce Impact’s glittering CV, and as the son of Japan’s late champion sire Deep Impact – who produced no fewer than 171 Stakes winners during a phenomenal career – there will be no shortage of farms keen to part with $16,500 and send their broodmares to Leneva Park, in Longwood.

Whilst Fierce Impact’s best performances came over a mile and further, Hanseatic was renowned for his pure, precocious speed with trainer Anthony Freedman going so far as to label him his “best two-year-old since Alinghi”.

The son of super sire Street Boss will be a very welcome addition to the team at Rosemont Stud, where he will stand for a fee of $17,600 alongside Victoria’s leading stallion Shamus Award.

The purchase of Shamus Award’s daughter Media Award for just $5,000 at the 2019 Inglis Melbourne Gold Yearling Sale again emphasised that whilst the top end of town continues to thrive, there are undoubtedly still bargains to be had.

Media Award delivered a maiden Group 1 win for her popular trainer Chris Calthorpe in the 2021 Australasian Oaks (2000m), in the process taking her career earnings past the $300,000 mark. Other bargain buys who broke through at Group 1 level in 2021 include Lunar Fox (by Foxwedge) and Savatoxl (Kuroshio), the winners of the Australian Guineas (1600m) and The Goodwood (1200m) respectively.

Purchased for just $8,000 at the 2017 Inglis Melbourne Gold Yearling Sale, Savatoxl has amassed career prizemoney earnings of $725,140 whilst Lunar Fox – who went for $40,000 at the same sale as Media Award – has already smashed through the $1 million mark.

It is therefore no surprise, given the strength and diversity of stallions currently standing across the state combined with the riches on offer through the VOBIS scheme, that Victoria’s breeding industry is riding the crest of a wave.

Other less high-profile stallions enjoying standout seasons include Reward for Effort, the Blue Diamondwinning son of Exceed and Excel who stands at Chatswood Stud. With his progeny having amassed more than 140 wins during the 2020-21 season.

Reward for Effort’s offspring banked more than $4.5 million in prizemoney and his highest earner was the six-year-old mare No Effort, who is trained by former jumps jockey Gavin Bedggood. Thanks chiefly to her three wins and four minor placings, No Effort made more than $250,000 for her connections.

In terms of getting ‘bang for your buck’, Redente is arguably the best value son of Redoute’s Choice standing at stud in Australia.

Redente forms part of the roster at Riverbank Farm, who have enjoyed their most successful season to date with studmasters Russell Osborne and wife Caroline Duddy on course to notch more than 100 wins for the first time – all by the progeny of their seven resident stallions.

The Brett Scott-trained gelding Redsnap brought up Riverbank’s 99th victory of the campaign when he claimed his second straight win at the Queen’s Birthday Raceday on his home track. The son of Redente has a 50 per cent winning strike rate and has already earned more than $100,000 in prizemoney from just six starts – not a bad return on his sire’s $3,300 service fee.

His precocious two-year-old, Rocket Tiger, was placed in both the Group 2 Silver Slipper Stakes and the Group 3 Black Opal, and Cluster is also the sire of Stakes-placed mare Gee Gees Darl plus multiple winners Tarcoola Diva, Centaur and Tocatchacod.