Finance Tycoon stamps his class in THE SHOWDOWN

Victorian Stallions > Finance Tycoon stamps his class in THE SHOWDOWN 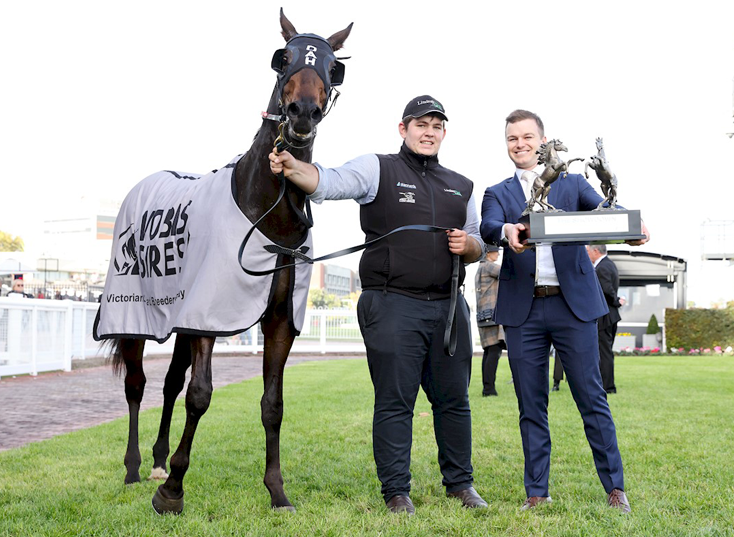 The Showdown was one of the few feature two-year-old races held in Victoria missing from Written Tycoon’s resum , but he added the $1 million showpiece to his glittering trophy collection when his talented son Finance Tycoon romped to victory in the 2021 edition.

Written Tycoon came close to taking out the inaugural running of The VOBIS Sires Showdown at Caulfield in 2019, when Hightail chased home Toronado’s Prince of Sussex, who was subsequently sold to Hong Kong interests for a cool $1.75 million.

The super sire ticked off another milestone in his ever-growing list of achievements when Finance Tycoon stamped his class in the marquee race on Victorian Owners and Breeders Raceday. For good measure he also sired the Matthew Williams-trained filly Literary Magnate, who finished ‘best of the rest’ some fourand- a-half lengths behind the dominant winner.

Remarkably, it was the sixth start of Finance Tycoon’s embryonic career, which has so far yielded three wins and more than $800,000 in prizemoney.

He was given only a brief spell by the Lindsay Park training team between the end of his 2020 spring campaign, which culminated in victory in the Group 3 Maribyrnong Plate (1000m) at Flemington, and the start of his 2021 summer preparation, which began with a bang in the Aquis Gold Nugget Quality (1100m) at the Gold Coast – where the beaten brigade included subsequent Magic Millions 2YO Classic winner Shaquero.

With an iron constitution to match his good looks, Finance Tycoon arrived at Caulfield on 17 April as fresh as a daisy having been specifically set for The VOBIS Sires Showdown, instead of heading north of the border to Sydney’s autumn carnival.

Co-trainer Ben Hayes said: “We have a very high opinion of Finance Tycoon so we toyed with the idea of heading towards the Golden Slipper after his fourth in the Blue Diamond Stakes, but in the end we decided to keep him at home and target The Showdown. The prizemoney is obviously a great incentive and we’d already taken him up to Queensland for the Magic Millions Carnival, and the travelling can sometimes take its toll on young horses.

“We were very confident heading into the race, he’d never really been out of work but he has such a good constitution and his work at home showed us that he was rock hard fit and ready to run a big race.”

John Sadler’s unbeaten colt Starry Legend had been all the rage in the build-up to The VOBIS Sires Showdown but punters soon latched onto the chances of Finance Tycoon, who was bred by Boom Racing Thoroughbreds and purchased for $150,000 at the 2020 Magic Millions Gold Coast Yearling Sale by McKeever Bloodstock.

Having backed him into favouritism, his supporters had very few causes for concern as Finance Tycoon travelled beautifully throughout the race and looked the winner a long way from home.

Despite being eased down near the line by jockey Luke Nolen, who quipped that he “invoked the mercy rule”, Finance Tycoon’s winning time of 1:08.91 was the third fastest by a two-year-old over the track and distance since August 2007. Only Sepoy (1:08.55) and Tagaloa (1:08.56) have covered the 1200m at Caulfield in quicker time, when they won the Blue Diamond Stakes in 2011 and 2020 respectively.

Perhaps surprisingly, Finance Tycoon was Lindsay Park’s sole two-year-old Stakes winner across the 2020-21 season, and he looms as the stable’s flagbearer ahead of the coming campaign’s major three-year-old sprints, chiefly the Group 1 Coolmore Stud Stakes (1200m) on his home track at Flemington.

Hayes said: “We always thought he’d mature into an even better three-year-old, so what he’s done so far in his career is purely down to talent. To do what he did in The Showdown was super, it was impressive to the eye and the times obviously backed up what an exceptional performance it was. Obviously, you never quite know how they’re going to come up as a three-year-old, but if he can continue to improve mentally and physically, he’s going to be a very exciting prospect in the spring.

“We haven’t mapped out a program for him just yet, but his main aim would be the Coolmore and we’d probably look to kick him off in a race like the Group 3 McNeil Stakes [at Caulfield]. We’ll look to keep him at sprint trips and if he can get a Group 1 on his CV, as a son of Written Tycoon you’d have to think he’d be a very valuable commodity when he went to stud.

“For now he’s just enjoying himself in the paddock here at Euroa, he hasn’t really had a proper break yet in his career so hopefully he comes back refreshed and can build on what has already been a very impressive race record.”

Like Finance Tycoon, Literary Magnate was also sent to the paddock after the race to freshen up ahead of her campaign as a three-year-old.

Having won her maiden on a ‘heavy eight’ track at Warrnambool and finished runner-up behind Finance Tycoon on a ‘good three’ surface at Caulfield, the flying filly has already proved her versatility; and with more than $200,000 in the bank after just two runs, the $135,000 Matthew Williams Racing paid for her at the 2020 Inglis Classic Yearling Sale is looking like an extremely shrewd investment.